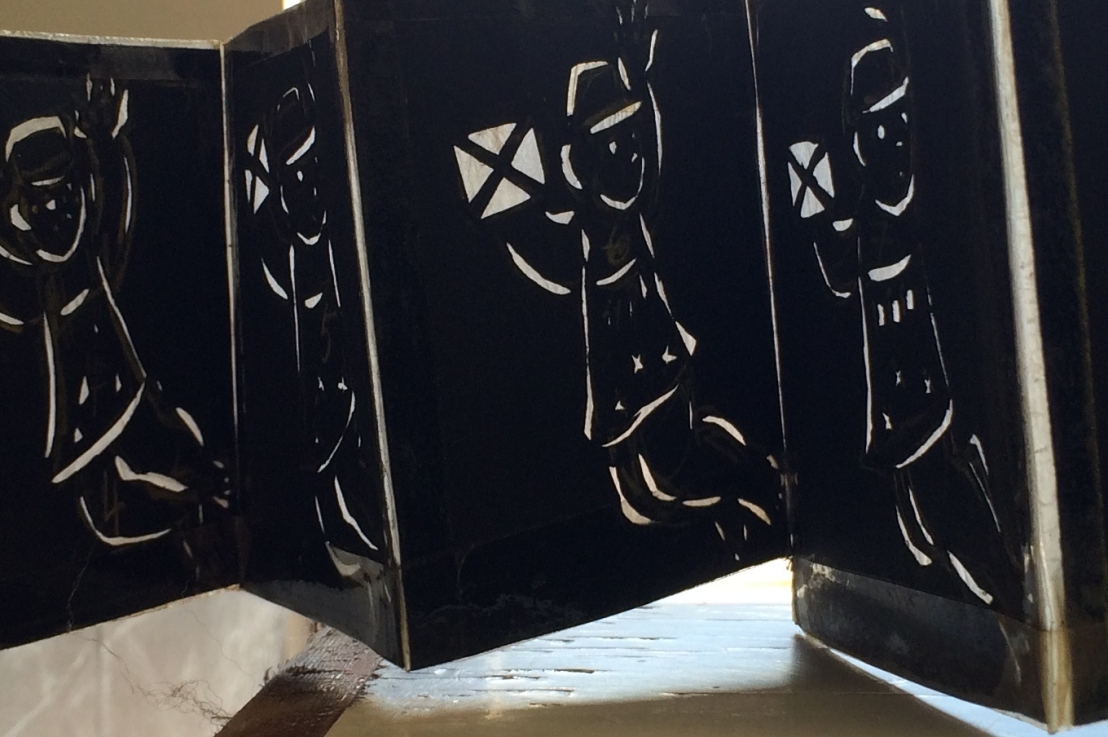 The Lotte Reiniger paper archive – a collection of cut-outs, back drops and other props and paraphernalia – came to the Huntley Film Archive in a suitcase as a gift to its founder, John Huntley, from the animator herself at some point in the 1960s.[i] Containing original silhouettes from Reiniger’s much loved animation films, for instance, bird figures from Papageno (1935) (her re-working of Mozart’s The Magic Flute) or her long-forgotten English silhouette films (The King’s Breakfast (1936) and The Tocher (1937)) as well as sketch books and other preparatory materials, the suitcase itself becomes an important symbol for Reiniger, a German émigré whose life was characterised by itinerancy.

Born in Berlin in 1899, she first became involved in cinema via the theatre and the influence of German expressionist actor Paul Wegener. Joining the Institute for Cultural Research, she there met her husband Carl Koch and it seems apt to mention that their early animation experiments included a silhouette adaptation of Hans Christen Andersen’s fairy tale, Der Fliegende Koffer or The Flying Suitcase (1921). Collaborating with Koch as well as prominent figures from Weimar cinema, Walter Ruttmann and Berthold Bartosch,the small team produced The Adventure’s of Prince Achmed (1926), now considered the earliest surviving animated feature length in cinema history. Following the rise of National Socialism, however, Reiniger would leave Germany for London in 1935. This temporary settlement was soon disturbed by the outbreak of the Second World War, which drove the animator to Rome and then back to Berlin, before she returned to the UK in 1949, taking British citizenship. Moving to an artist’s commune in Barnet, her home for many years until 1980, it was during this time period that she would have encountered John Huntley, perhaps through the British Film Institute where he worked in distribution and programming.

As a PhD researcher working on Reiniger’s early years in Britain in the 1930s, the flying suitcase given to John Huntley holds many important discoveries. The cut-out of a Scottish character labelled ‘the dancing laird’ and adorned with a tam o’Shanter and kilt, is recognisable as one of the protagonists from The Tocher: A Film Ballet (1938), Reiniger’s first commission for John Grierson’s GPO Film Unit. During 1930s Britain, this government-sponsored group were responsible for the production of information and advertising films related to the activities of the post office. Along with Len Lye and Norman McLaren, whilst in exile in London, Reiniger was employed to create short-form animated fillers, described in a GPO pamphlet as ‘technical novelties which serve to focus attention on a particular Post Office subject’.[ii] In The Tocher, set in the Scottish Highlands, the cruel laird is won over and the happy ending brought about by the appearance of a Post Office Savings Bank book.

Another GPO-related object in the Huntley collection is a curious concertina-style device or optical toy, decorated with multiple cut-outs of the same cherubic character, each one slightly different in size. With his post-boy hat and envelope, the figure is almost identical to the angels that appear in Reiniger’s second GPO title, The HPO or The Heavenly Post Office (1938), which advertised the new Greetings Telegram service. Unusually for Reiniger, this animation employed white silhouettes against a brightly coloured backdrop. This piece of filmmaking apparatus was perhaps used to create a zoom-type effect. The artefact is certainly very unusual and reveals the experiments and tricks masked beneath the animated spectacle of Reiniger’s moving silhouette films.

A further technique for mimicking live-action camera-work is unveiled in the silhouette puppets from Reiniger’s first film made in England, The King’s Breakfast, adapted from the A. A. Milne nursery rhyme. Always working on the flat, two-dimensional surface of her animation stand, known as her ‘tricktisch’, in order to play with perspective and focus in on different characters, Reiniger had to re-produce her puppets in smaller and larger sizes. Along with the dairy maid and the Alderney Cow who refuses to produce ‘a little bit of butter’ for The King’s Breakfast, the puppets in the Huntley archive include a larger rendering of the Royal couple, labelled ‘Close Up King + Queen’. Envelopes of ‘Materials’ feature smaller pieces (a silhouette bucket, broom, the Dairymaid’s milk pale), all made of paper, cardboard and lead. As Reiniger explained in numerous How-To articles published in newspapers and film journals or her series of public lectures, multi-jointed puppets made entirely from paper were too delicate and difficult to manipulate on the tricktisch. Combining paper, card and lead created the best results and these different components are evident in the multiple puppets in the Huntley Film Archive.[iii]  The earliest item in the suitcase – the circus director from Die Jagd nach dem Gluck (Running After Luck) (1928) – would have been made for the animated sequence in Reiniger’s feature-length live-action film, co-directed by the animator and Rochus Gliese. Produced in Berlin and starring Reiniger’s close friends, the French film auteur Jean Renoir and his then wife, the silent film star Catherine Hessling, who played a shadow puppet artist, the main live-action segment of this title sadly remains lost. However, footage from Reiniger’s animated segment does survive, probably from a copy shipped to England for a screening by the London Film Society on the 19th Oct 1930.

Given Lotte Reiniger’s itinerant existence and rather turbulent personal history – moving frequently between Germany, Britain, Franco’s Italy, France and Greece, surviving two world wars, stigmatisation as an ‘enemy alien’, starvation in WWII, and lonely later years as a widow – the survival of this suitcase and its fragile, paper contents is remarkable. The dissemination of Reiniger materials in archives and holdings across Europe might even be used as a means of mapping her unusual trajectory. Often on the move, particularly in her early career, the filmmaker would carry whatever she could travel with and was often forced to leave things behind, which sometimes made their way into public and private collections.[iv]

Moreover, the contents of the collection now at the Huntley Film Archive are particularly illuminating for re-visiting Reiniger’s early years in London. As my PhD thesis argues, although often overlooked, this 1930s period was a rich and prolific moment in her career, as supported by archival materials. Indeed, the silhouette figures and back drops from these British-made films – The King’s Breakfast, The Tocher, as well as the never completed Dream Circus project (described by Reiniger’s biographer as a ‘lost classic’) – are all testament to this moment of fame and success. As Reiniger wrote in a letter to her close friend Bryher in early 1936 having recently re-located to London, ‘They begin to call me Disney with the scissors!’.[v] As well as the plentiful collection of Reiniger’s animations available in the Huntley Film catalogue (including titles such as Carmen, Cinderella and The Frog Prince), this unusual paper archive is a rich resource for scholars and cineastes, calling for further attention to this significant but greatly under-valued pioneer of the silhouette film.

Tashi Petter is a Doctoral Candidate from Queen Mary University of London, where she is writing a thesis on Lotte Reiniger with a focus on the 1930s years, her experiences in exile and her filmmaking-as-craft. Tashi is also a keen film programmer and enjoys curating analogue film screenings and re-staging 1920s/30s Film Society programmes for modern audiences. @tashi_petter

If you enjoyed this article, do have a look at the wonderful films of Lotte Reiniger’s work we have at Huntley Film Archives, which include the magical The Adventures of Prince Achmed, Cinderella, The Frog Prince and many more!

[i] As recalled by Amanda Huntley, John’s daughter, who now runs the Huntley Film Archive.

[iv] As well as her estate held in Tübingen in Germany, Reiniger materials are held at the BFI, the Mitchell Library Glasgow, the V&A, as well as many private collections and places overseas. See Lotte Reiniger’s page on the Women Film Pioneers website for more details, https://wfpp.cdrs.columbia.edu/pioneer/lotte-reiniger/

Welcome to Huntley Film Archive’s blog. Inspired by our collection of celluloid films, we explore a different topic each week, don our detective hats to identify mystery locations and maybe even educate, as we open the doors to the world of a film archive