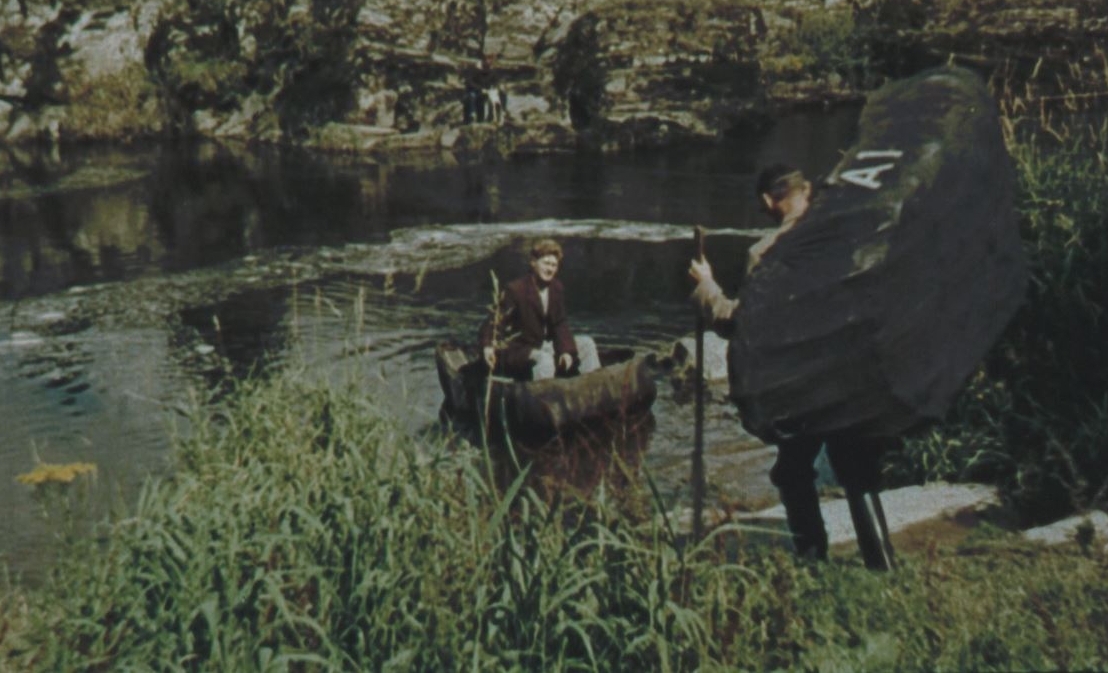 It was on a trip to St Fagans National Museum of History in Wales that I first came upon a coracle – a small, calico covered boat, just big enough for a single occupant and traditionally used for fishing. Other forms of the coracle, constructed of different local materials, can be found in Ireland and Scotland, not to mention the world over – Iraq, Tibet and India, for example. It is a vessel that I’ve since discovered bobbing around here at Huntley Film Archives, so I thought I’d explore more. Despite the ancient appearance of this fishing craft, I was intrigued to discover that there is a Coracle Society that still champions the use of the vessels and our education about them.  I set out to write an article about a long forgotten and archaic mode of transport, but I soon had to eat my words because as we’ll see below, they are actually far from it. (Click on the pics to view the films).

I think what I find most engaging about them is the apparent ease with which they enable a fisherman to wander down to a riverbank with the boat across his back, effortlessly fling it into the water and hop on in. Far from the hard grind that you usually see involved with fishing, the men in these films don smart woollen jackets and caps, navigating around so casually they hardly miss a puff on their pipes. One coracle man in this 1950s has even kept his watch and chain on. He casts a net, with his companion across the river, whilst holding his coracle in place using a single ore.

This 1950s travelogue of Pembrokeshire in Wales includes footage of the use of coracles on the River Teifi. At 5:59 minutes in, two men can be seen manning their sedentary craft in an idyllic, leafy section of the river. Gently paddling (and puffing) their way through the calm waters. A somewhat less serene experience follows in the next scene, in which several men use coracles for the annual sheep washing on the Teifi in Cenarth.

Although this next film appears to be more of an advert for the new convertible Ford V8 motorcar, from 07:03 minutes in it does has a lovely sequence featuring a group of coracle fishermen at work under Cenarth Bridge on the River Teifi. They approach the river with their coracle shells, get afloat, quickly work as a team to cast nets and then easily hoist themselves and their coracles back out of the water.

I think in most of these films, which were shot by tourists or are travelogues, there is a sense of novelty surrounding this unusual craft and the men who sat it them. The Salmon and Freshwater Fisheries Act of 1923 brought in more stringent regulations on coracle fishing, and by the 1930s only 12 existed on the River Towy, for example.[i] Even by this point, the film makers visiting Wales evidently found the presence of these increasingly rare coracle men intriguing, or even romantic; their presence on the rivers imbued with an ancient connection with the local landscape.

Similarly, the same could be said of this clip from a 1940s travelogue of Tibet, in which we see a boatman carrying his yak skin coracle across his arms. The way in which this shot has been edited together with other clips of the tools and habits of the local people starts to lend the film a distinctly anthropological feel, viewed through the lens of an outsider. Thinking back to those men with their ‘boat shells’ scampering up the road in Carmarthenshire, pausing only to look at a top of the range Ford V8 cabriolet car, I wonder if the lens they were viewed through was much different.

Welcome to Huntley Film Archive’s blog. Inspired by our collection of celluloid films, we explore a different topic each week, don our detective hats to identify mystery locations and maybe even educate, as we open the doors to the world of a film archive